Talgai Santa Gertrudis Stud and Prime Hay Suppliers is located in the Nindooinbah area, just outside of Beaudesert, Queensland.  The General Managers, Malcolm & Chick Gadsby, reside at ‘The Gorge’ and oversee all the companies’ agricultural operations.

‘The Gorge’ property is 2164 acres.  Its NE boundary runs along the Sarabah Range.  It runs up the valleys into iron bark and gum trees with natural pastures, Blue grass, Bambatsi and Rhodes grasses.  It is flanked by basalt columns located in the properties gorge from which the property derives its name. The top of the range affords magnificent panoramic views as far as Flinders Peak. ‘The Gorge’ offers freshwater pools at the base of the Sarabah Range, to undulating country that runs down to alluvial flats. The meandering Cainbable Creek flows through the heart of the property plus 3 bores for water supply.

Talgai’s Stud breeding program is based at ‘The Gorge’, with a hay operation also. The cattle breeding objective has been to breed herd improving sires for the commercial cattle producer.  The aim is to breed high growth, well muscled, easy finishing cattle to meet the market specifications.   Talgai believe that fertility is one of the strongest traits that should be in any herd.

The females’ bloodlines in the stud consist of Talgai, Bowenfels, Robenlea, Goonoo, Marston, Kelly Wallah, Doondi, Oakdale, Tyndale, Strathmore, Drensmaine, Dangarfield and Dunlop with 200 classified females. The aim is to sell approximately 20 quality bulls a year, as well as a handful of classified heifers. What doesn’t make the grade, are grown out and sold to meatworks or through the saleyard.  Quality non ‘S’ branded females are retained for the commercial herd.

Introduced into the herd in 2004 was Oakdale Whiskey.  His genetics and progeny have been a proven success for the stud within both the Sale & Show ring.  Sadly the gentle giant Whiskey passed away in late August 2009. 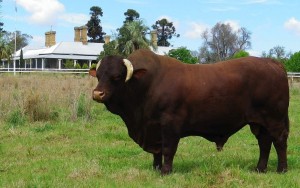 Oakdale Whiskey’s son, Talgai Arnie, was also retained and has been another core foundation sire. 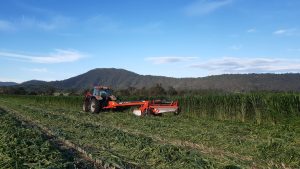 Adjoining property Broadlands is 3323 acres. It is one of the largest properties in the Nindooinbah district.  It offers excellent deep soil flats with double frontage to Cainbable Creek.  The property has pastures including Rhodes, Paspalum, Setaria, Siratro, Kikuyu and clovers. 170 acres of irrigation is developed with prime Lucerne, and a further 295 acres of dryland farming for hay.

Under the watchful eyes of mangers Tim & Anita Mahon, a variety of Lucerne, Oaten Barley, Forage Sorghum and Pasture hay is grown.

A Santa/Charolais breeding herd is also based at Broadlands, with background steers and heifers to fatten and market through to meatworks or saleyards.