The Talgai enterprise was establish in 2004, after owners Max & Roz Baldwin purchased the entire Robenlea Santa Gertrudis Stud and property, “Dingyarra” at Toogoolawah. The Talgai Santas prefix and Stud No 1990 came into the Santa Gertrudis industry in 2005, as the Baldwin family owned the Australian Heritage listed homestead Talgai near Allora on the Darling Downs, and that is how the Stud prefix came about. The whole stud operation in 2007 moved from “Dingyarra”, located in the Brisbane Valley, up to the Darling Downs, after purchasing another two properties. In 2014 The homestead was sold.

In March this year the company purchased “The Gorge”, located in the Nindooinbah area just outside Beaudesert.  The entire Stud operation has been moved and a commercial herd and hay business will also run from this property.  “Uruga’, west of Allora on the Condamine River, will continue its hay operation. 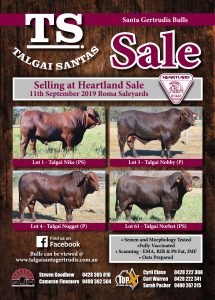